So apparently there’s around a two day queue backed up at the south end of the Suez canal.

According to the BBC there was an official opening ceremony which presumably shut down the whole canal for quite a while. Bollocks. The Progress Ace was originally due to go through the canal on the day of the opening; hence the schedule being pushed back a day I guess, but it arrived at the south end of the canal at least 36 hours ago now and it still hasn’t got through. Other ships that arrived around the same time are starting to make their way through the canal now as I head off for the 26th sleep-to-go. 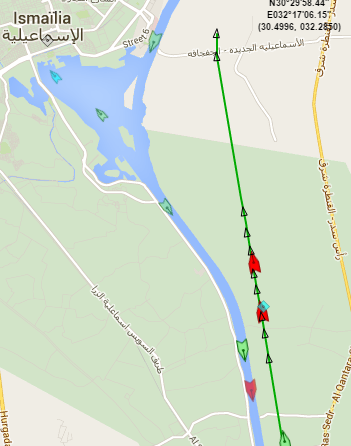 If nothing else it’s been a little fun working out the track of the new expansion by watching other ships run off the watercourse on the map :). The Progress Ace will be one of the first ships to run the route… so by consequence so will our new 3 🙂 Thinking about it; it’ll be the first batch of 3’s to ever do it 🙂