3 years on I never got the car to connect to the WiFi hotspot my phone created, hence connected services traffic updates never worked. Running on a bad traffic day I’d set my phone down by the handbrake and let it reroute around the traffic; but I still kept the destination on the Mazda Connect display and followed that as normal, just choosing to ignore when the phone routed me around. Not ideal.

New phone & new announcement from Mazda that Android Auto was being released to work with the CMU I started looking in to how to get it working. Mazda’ll do it for ~£350 including a necessary “hardware upgrade” (purportedly upgrading the USB2 connection to USB3) but heck; that’s a lot.

Especially when there’s MazdaTweaks that claims to have successfully self installed. Being an IT Pro by day I thought; it can’t be that hard; worth a go.

Switch off WiFi & BLuetooth in the car (recommended, not required but why wouldn’t you?) & removed everything else USB except the SatNav card.

Switch on the car. Wait a few minutes while it updates: 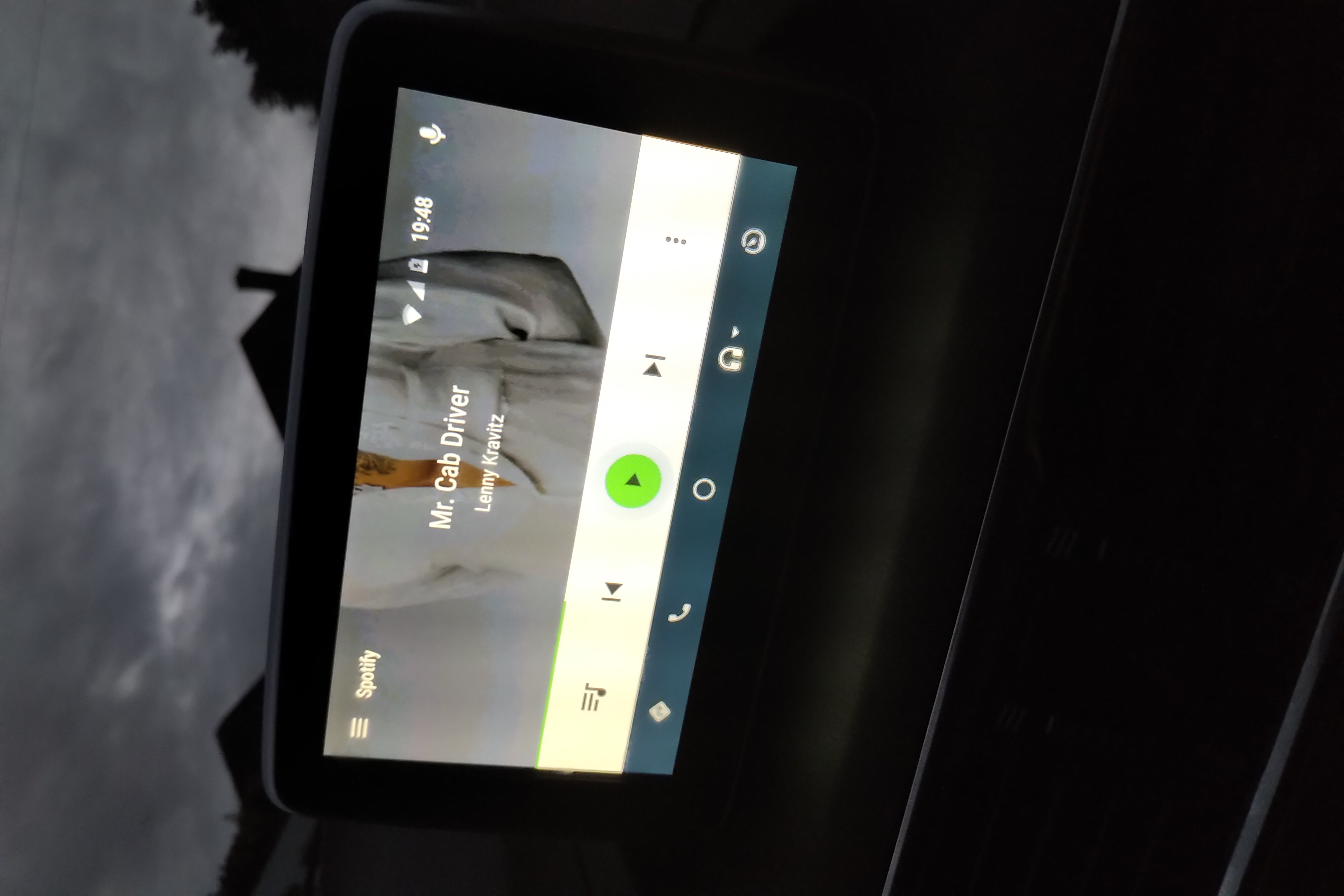 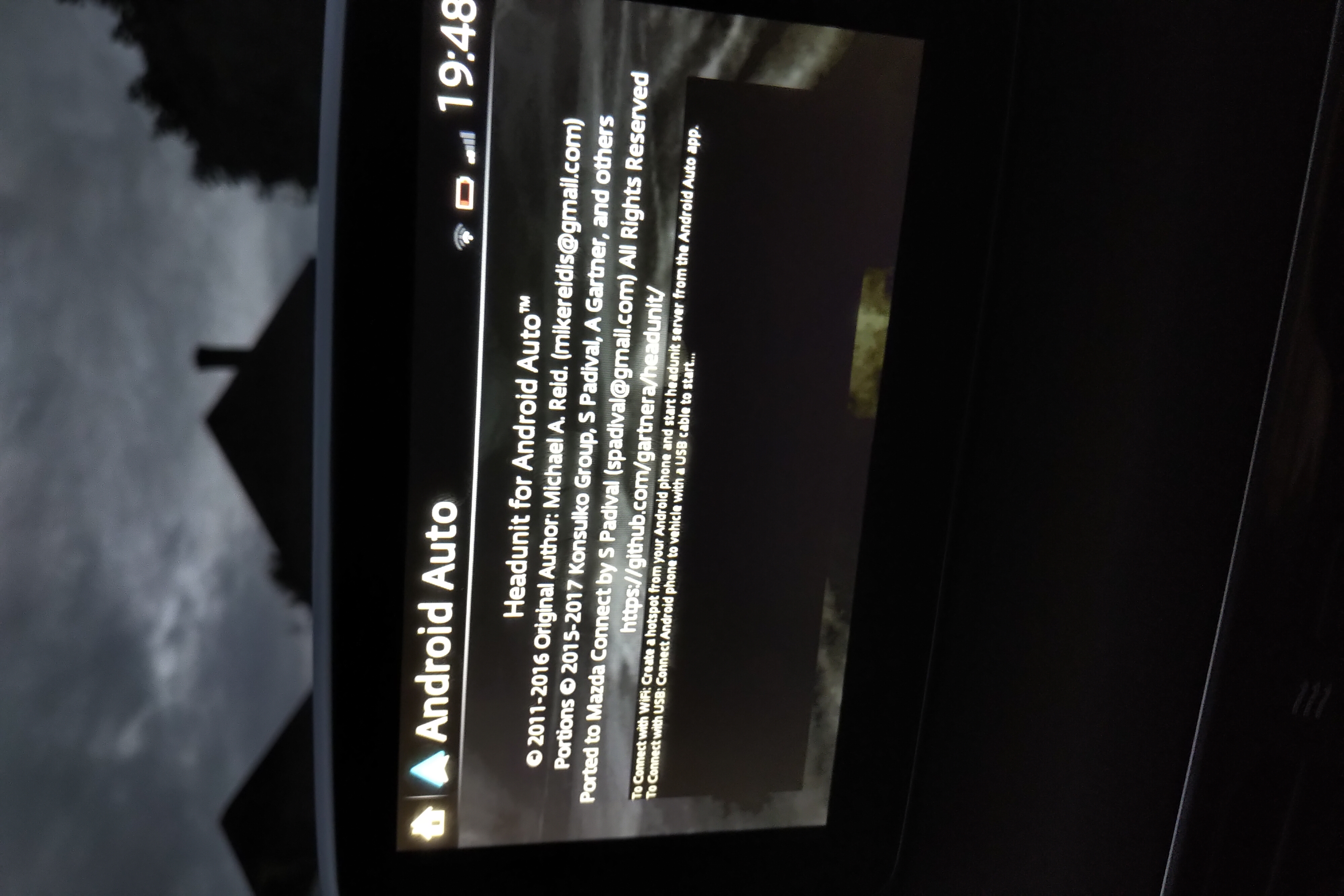 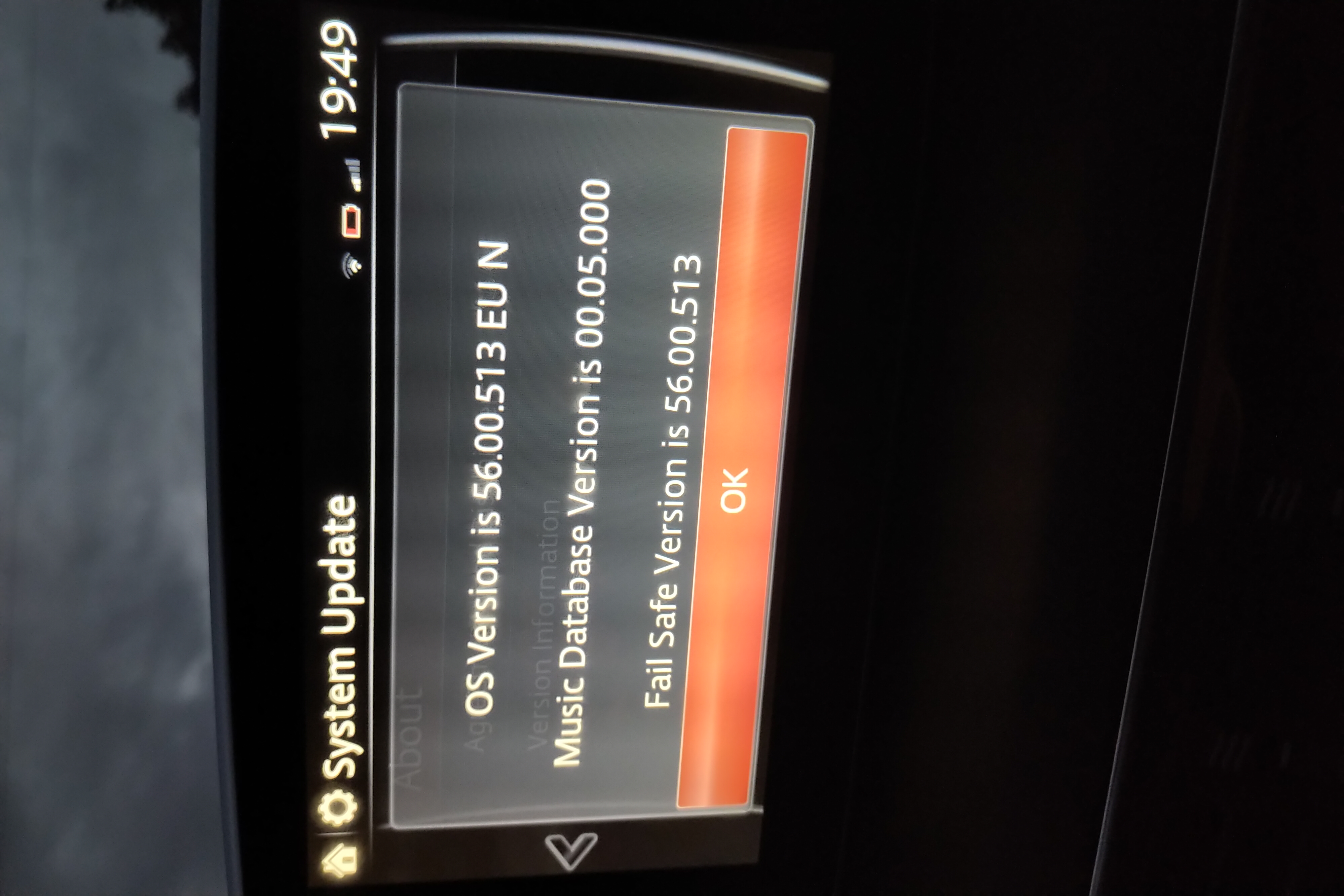 Couldn’t be easier. Sorry for the sideways photos; stupid new phone 🙂 & I can’t be bothered going back and rotating the images just now…

Big Kudos to the guys over at MazdaTweaks for making it so easy!

One note of caution; seems like there’s something funny going on with Google breaking Waze in recent updates to Android Auto. Caused me problems and I had to do the Waze uninstall reinstall thing suggested here.

So one really annoying “feature” is the lack of a power point near the dash. There’s only a few points by your elbow in the centre console. It’s really not pleasant hanging a cable all the way through your arm space between passenger and driver up to the dash cam at the mirror, so I decided to see if it would be possible to power it from anything up around the light console/front rear-view mirror…

In the end I found two possible sources; to tap in to the back of the centre console, or to tap off the auto-dimming rear view mirror.

The rear view mirror is ignition switched, but I didn’t want to splice in to the cable and couldn’t find anywhere to get the connector blocks which I’m guessing must be proprietary to Mazda?

The next best option was to tap off the back of the centre console itself. There were three connector blocks; the lights, the speaker and I think the third is a mic for the hands-free/centrepoint. This is the route I decided to go down; specifically the light circuit as I thought it would be least likely to suffer from interference from anything I add… but it would require a low voltage disconnect inline since the lights aren’t ignition switched. 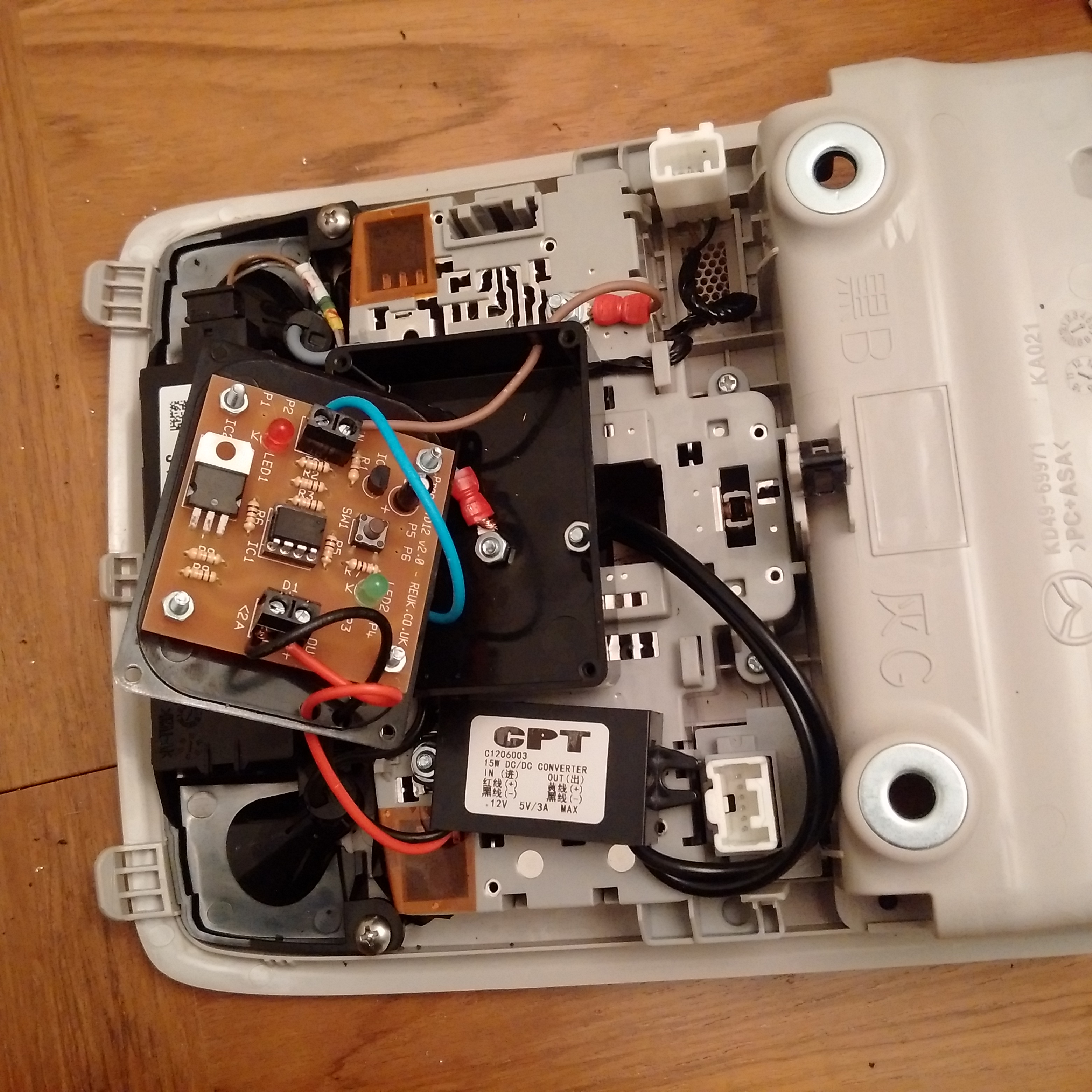 This is the final assembly – the LVD mounted in the black enclosure, the 12v to USB adapter at the bottom of the shot (CPT). I tapped the voltages; neutral from the unused sunroof connection (centre of shot), live from the head of the interior light (top of the shot) 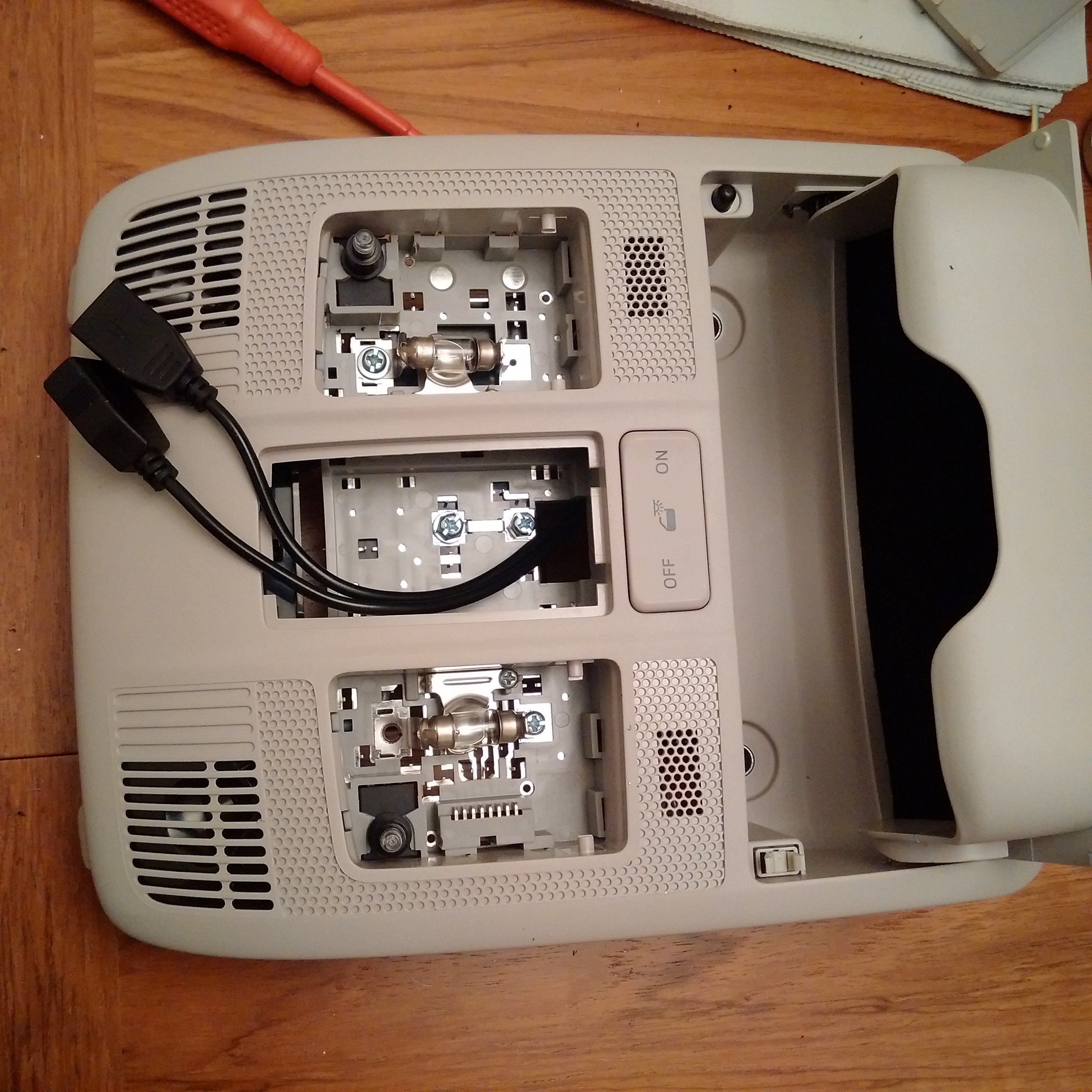 You can see the four screws I added from the other side here. The top one’s just holding the step down convertor in place. The middle two both tap the neutral from the absent sunroof control – the one to the left’s the one I’m actually using; I just included both to hold the black box in place. The bottom one’s supplying the unswitched live. 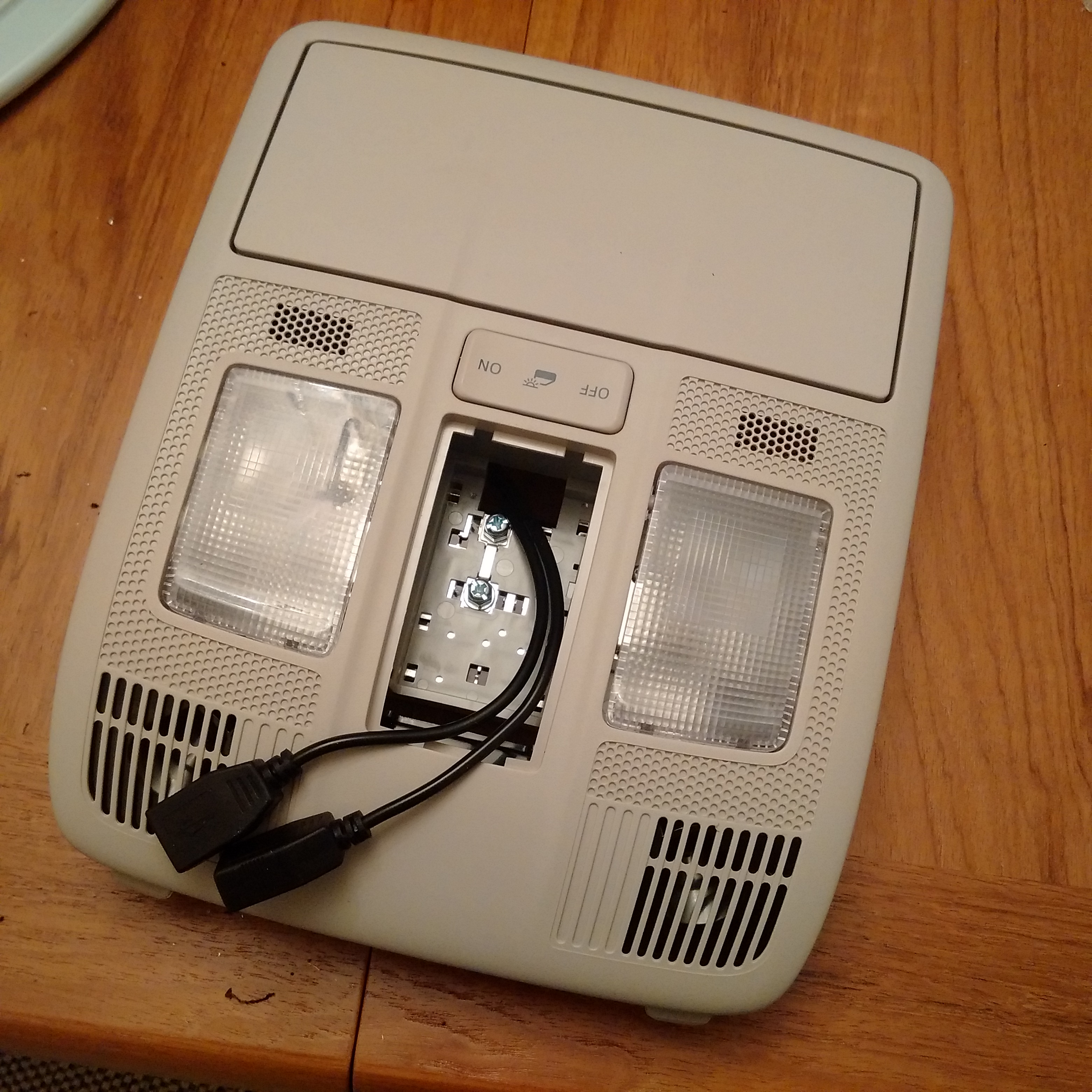 For convenience during proof of concept I dangled the USB connectors out the removed sunroof controls blanking plate; just in case I needed to disconnect it in a hurry… 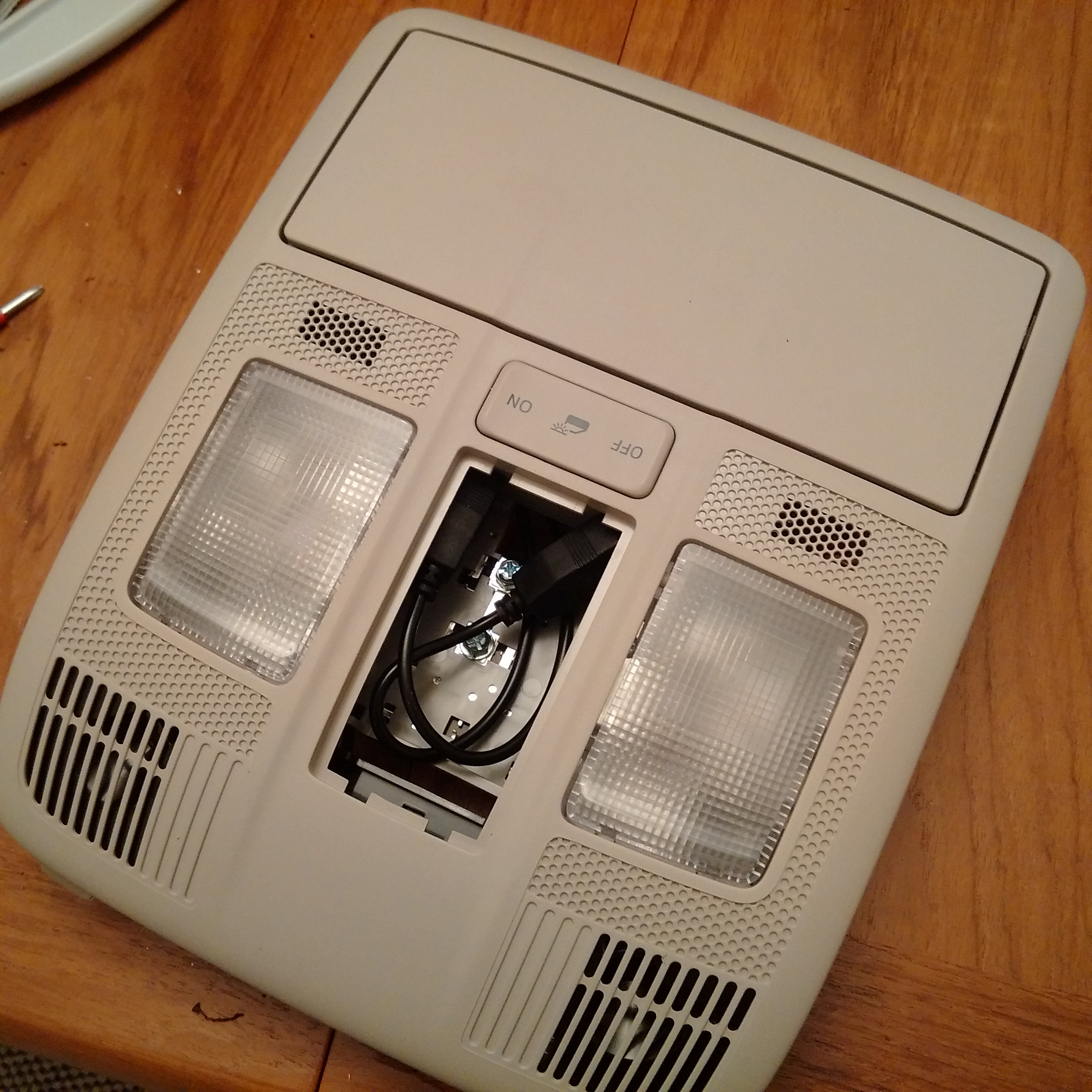 …but coiled up and out of the line of sight of the rear view mirror. 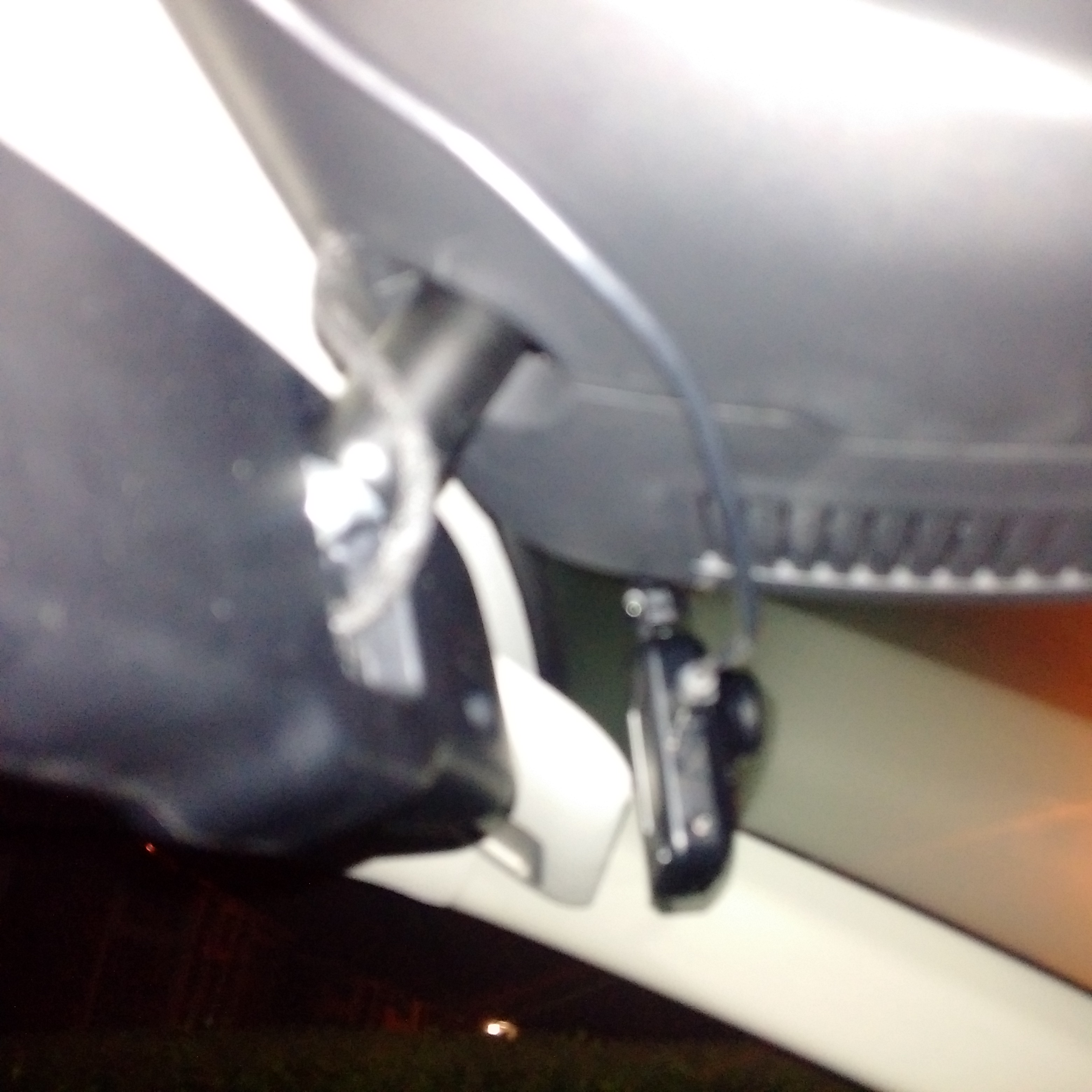 So this is all there is hanging in the cabin. 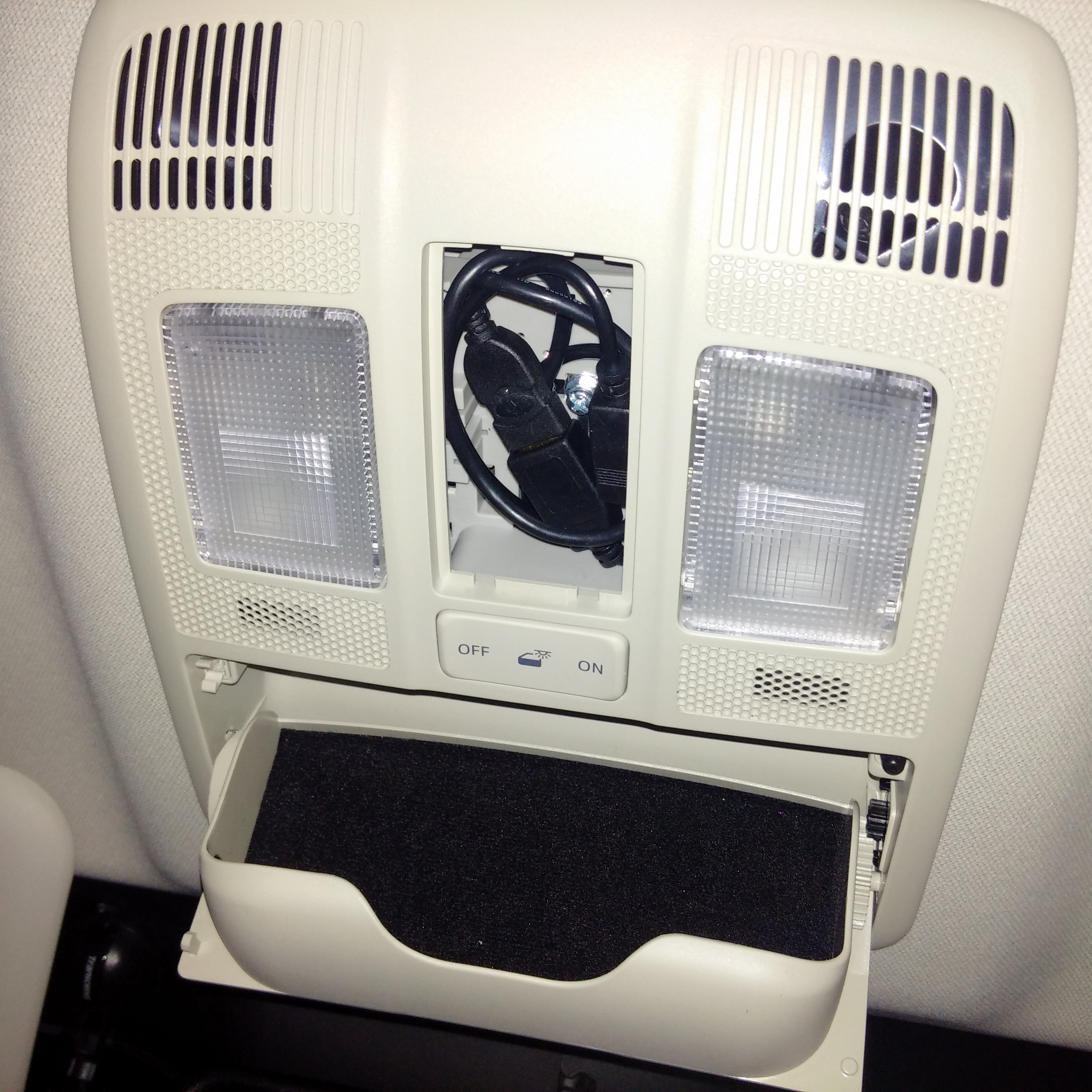 … and the only other cables are all coiled up and tidied away. Just thought, if I pop the blanking plate on now I’ll have trouble if I try to remove the panel as these coiled up cables will prevent me from pulling the panel down – so i’ll have to pop the whole panel off once more and arrange the cables in the roof space before putting the panel on complete with blanking plate. Before I do that though I’m going to leave it as is for a while, check all’s working ok – and also maybe get a Mobius camera which is more discreet than the old Transcend I’ve been rockin. 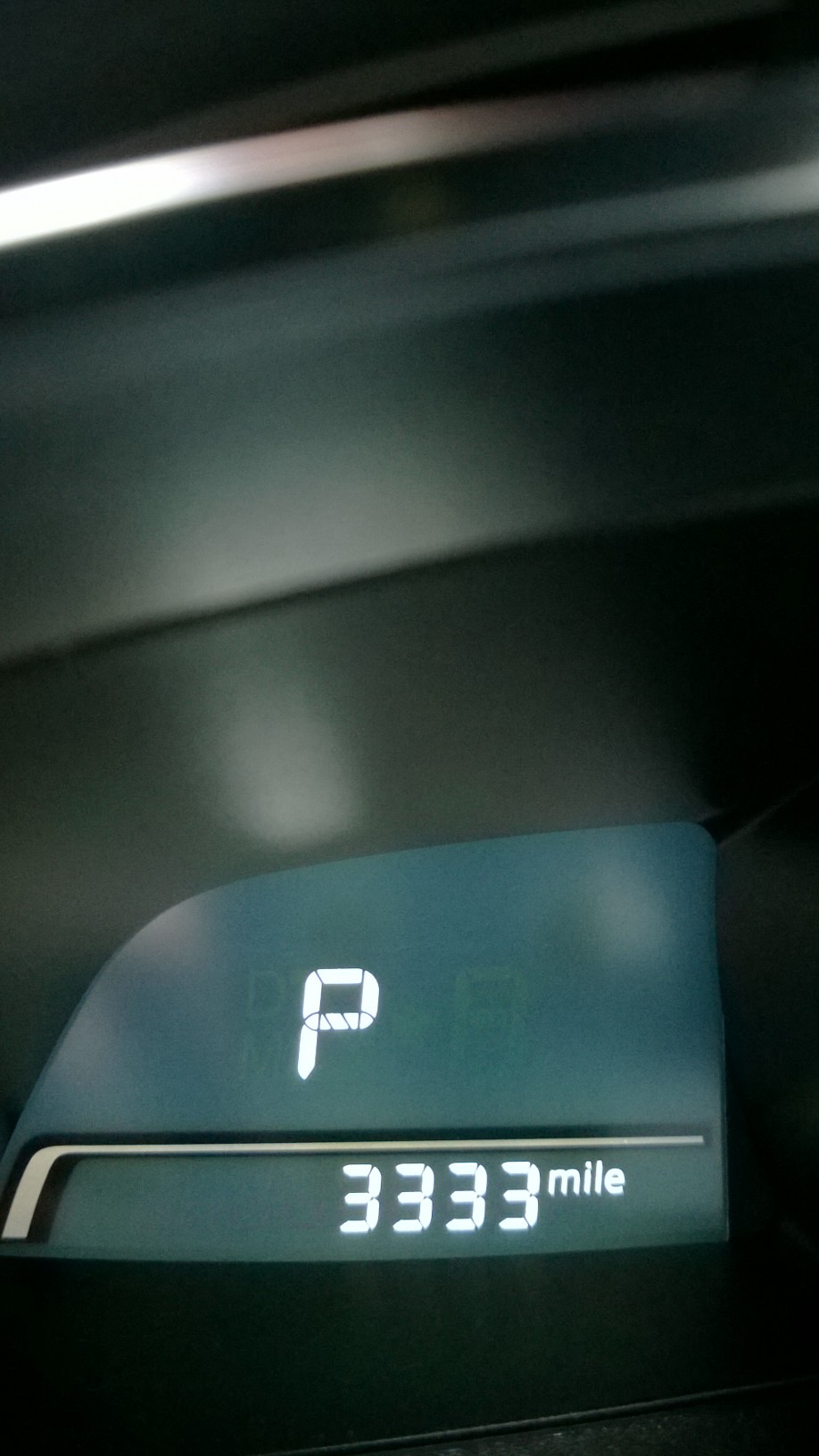 On the second day with the car we had to take an emergency detour to visit a dealer because the SatNav went nuts. Resetting to Factory Defaults seemed to clear the problem, and all had been fine since. Recently it had threatened to go nuts again, but until Sunday night just past it had recovered before getting too confused. Now it’s gone completely mad again. I’ve uploaded a video of it going nuts; at the very start we approach a roundabout but get caught at the lights but you can already see the SatNav thinks we’re stopped in the middle of the roundabout – we clearly weren’t! The fun really starts about a minute in to the video when the lights change and we take the first exit straight onto the A12; not the long slip road running alongside the A12, nor any of the side streets indicated. Thereafter for the rest of the video we’re actually just on the A12 heading south – certainly not what the SatNav seemed to think. Wasn’t the end of the world as having completed the unfamiliar back-street portion of our trip we didn’t need the SatNav anymore; but doesn’t change the fact that clearly the SatNav as it stands simply isn’t fit for purpose.

What do you think? Fit for purpose? 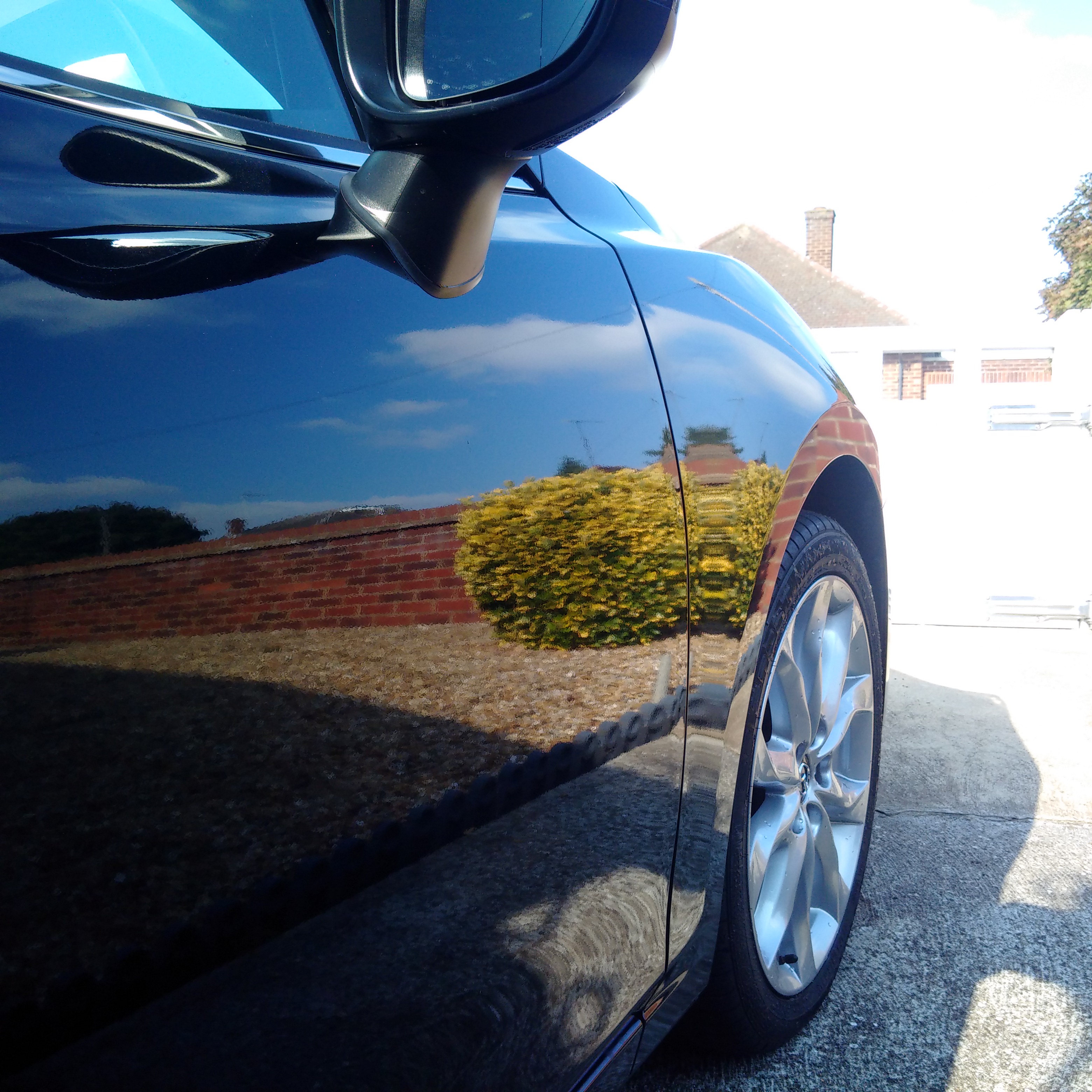 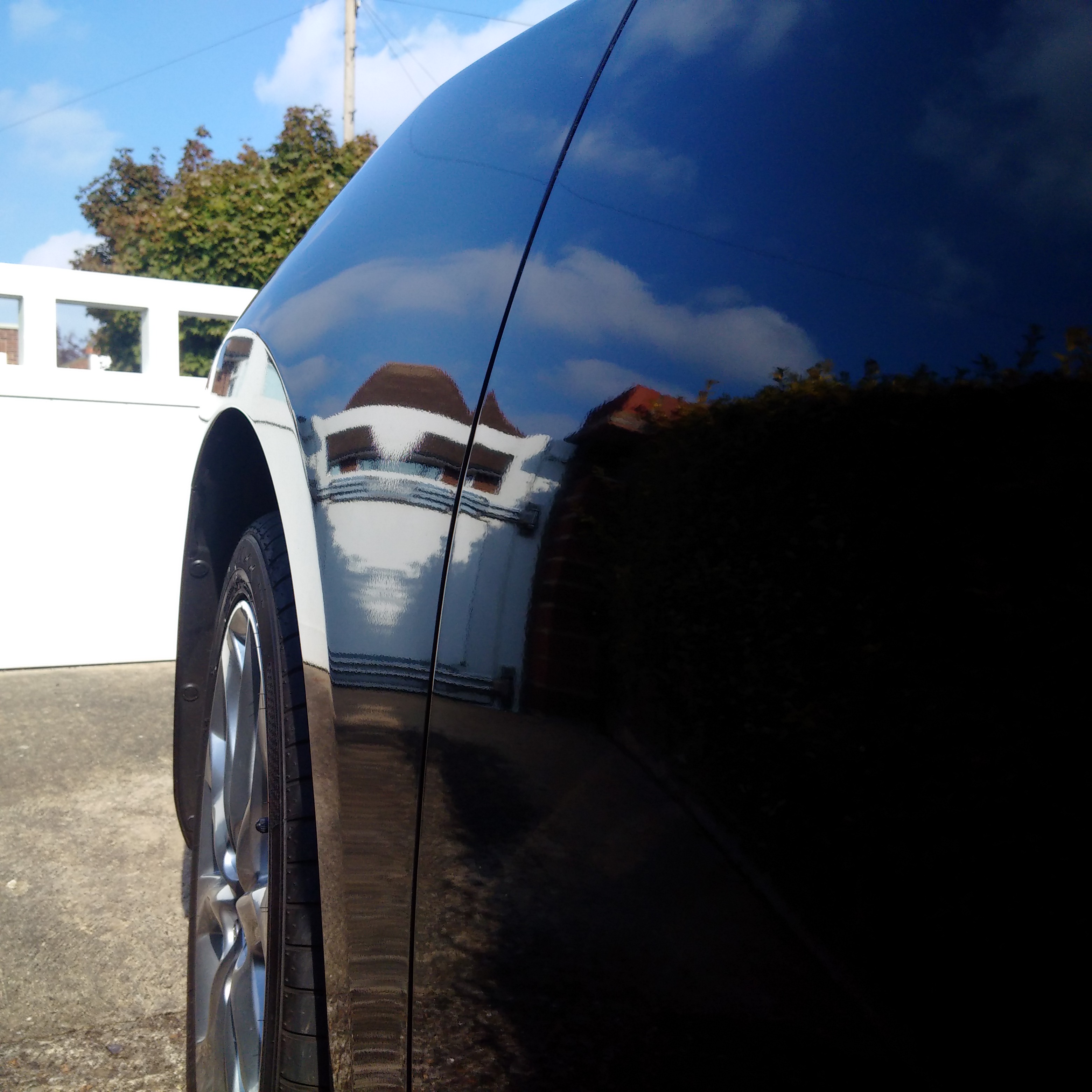 Total eclipse of the moon 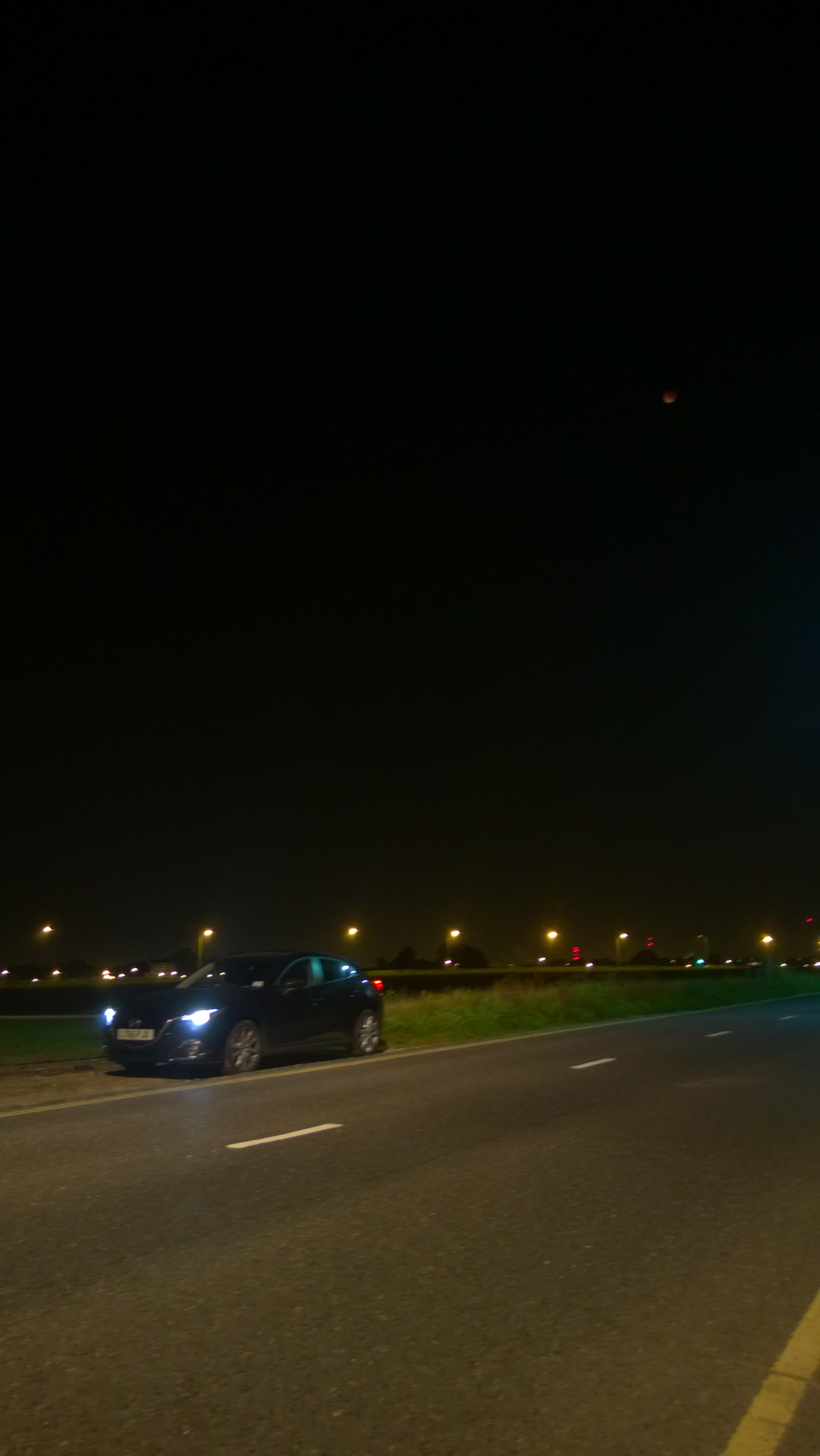 Having waited ’til almost 4am have you ever wished you had a better camera? 🙂 Stunning glowing ember to the naked eye, bit of an unimpressive slightly red blob on camera. Nvm. 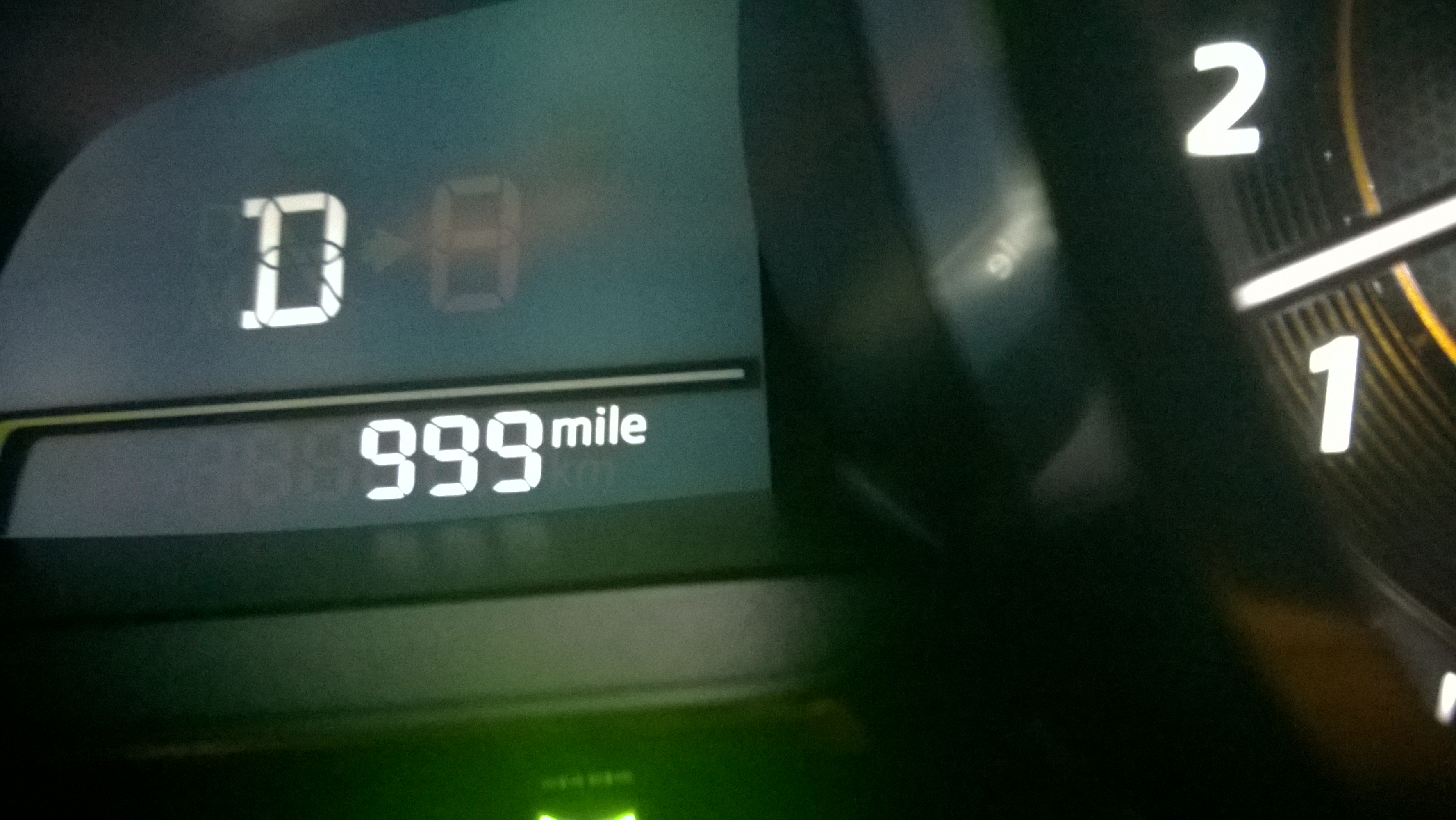 …and the first appearance of the fourth digit… 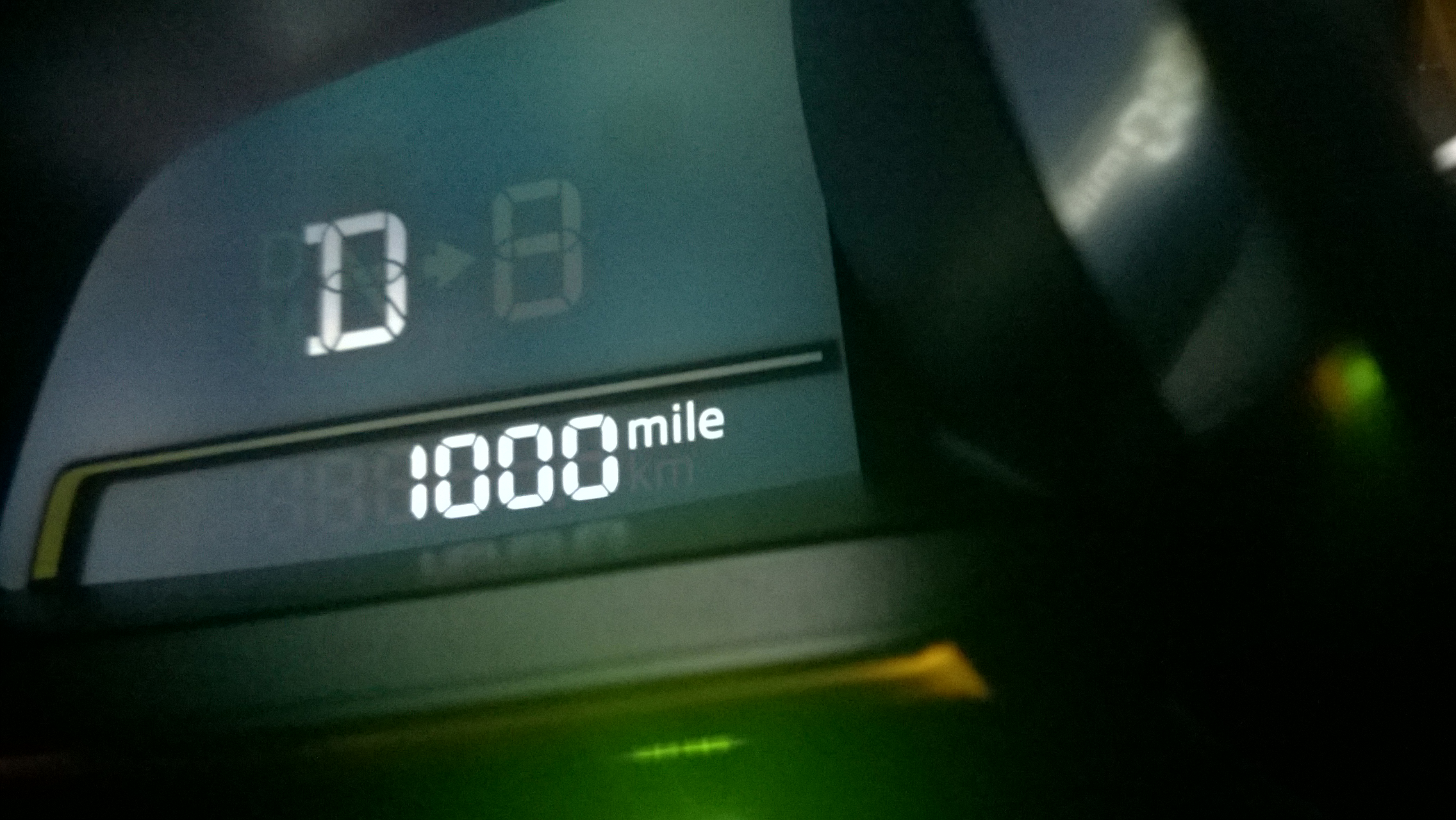 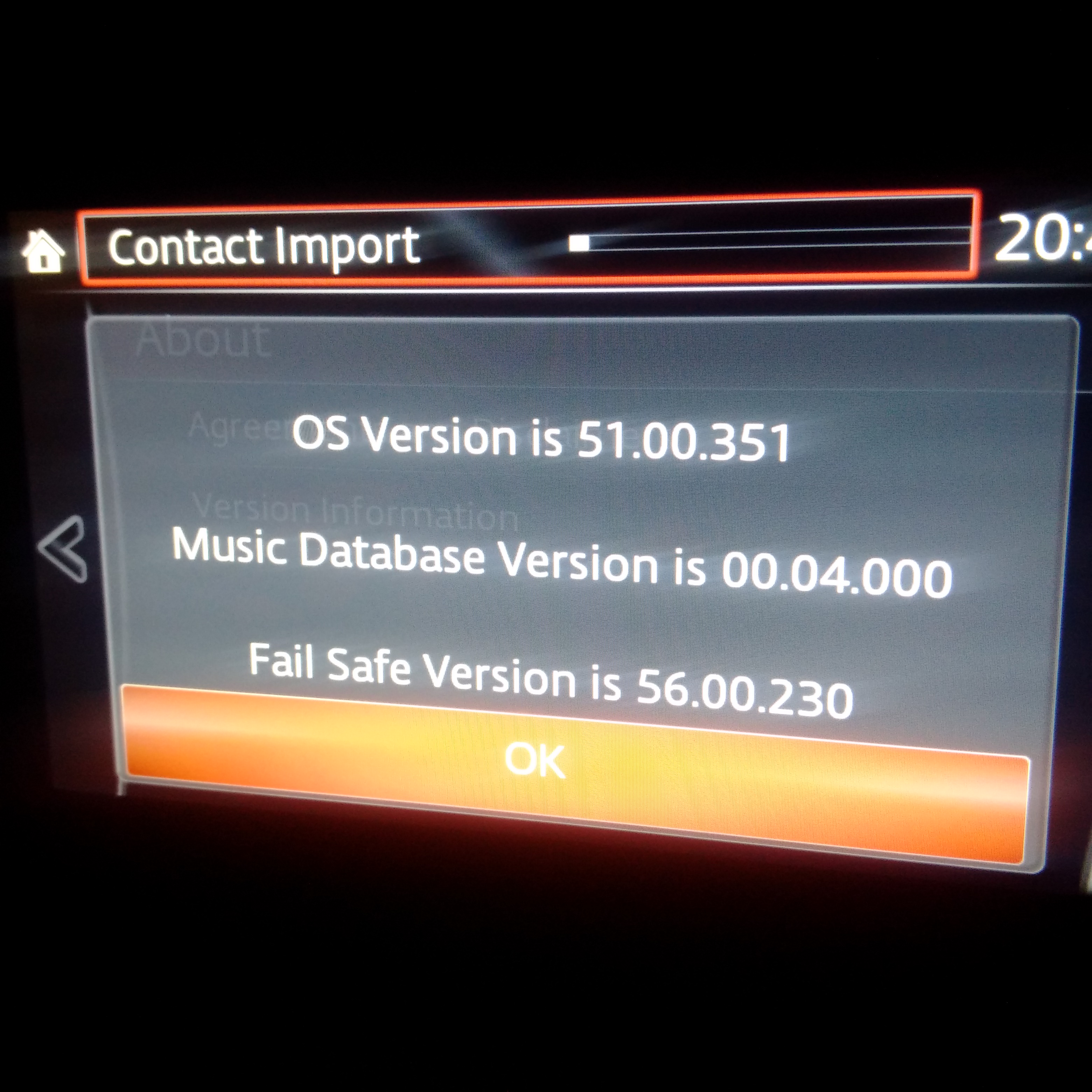 What’s the difference between/significance of the OS and FailSafe versions? I’m wondering, when they did a factory reset following satnav problems, have I been downgraded from the FailSafe to the OS (counter intuitive comment I know). 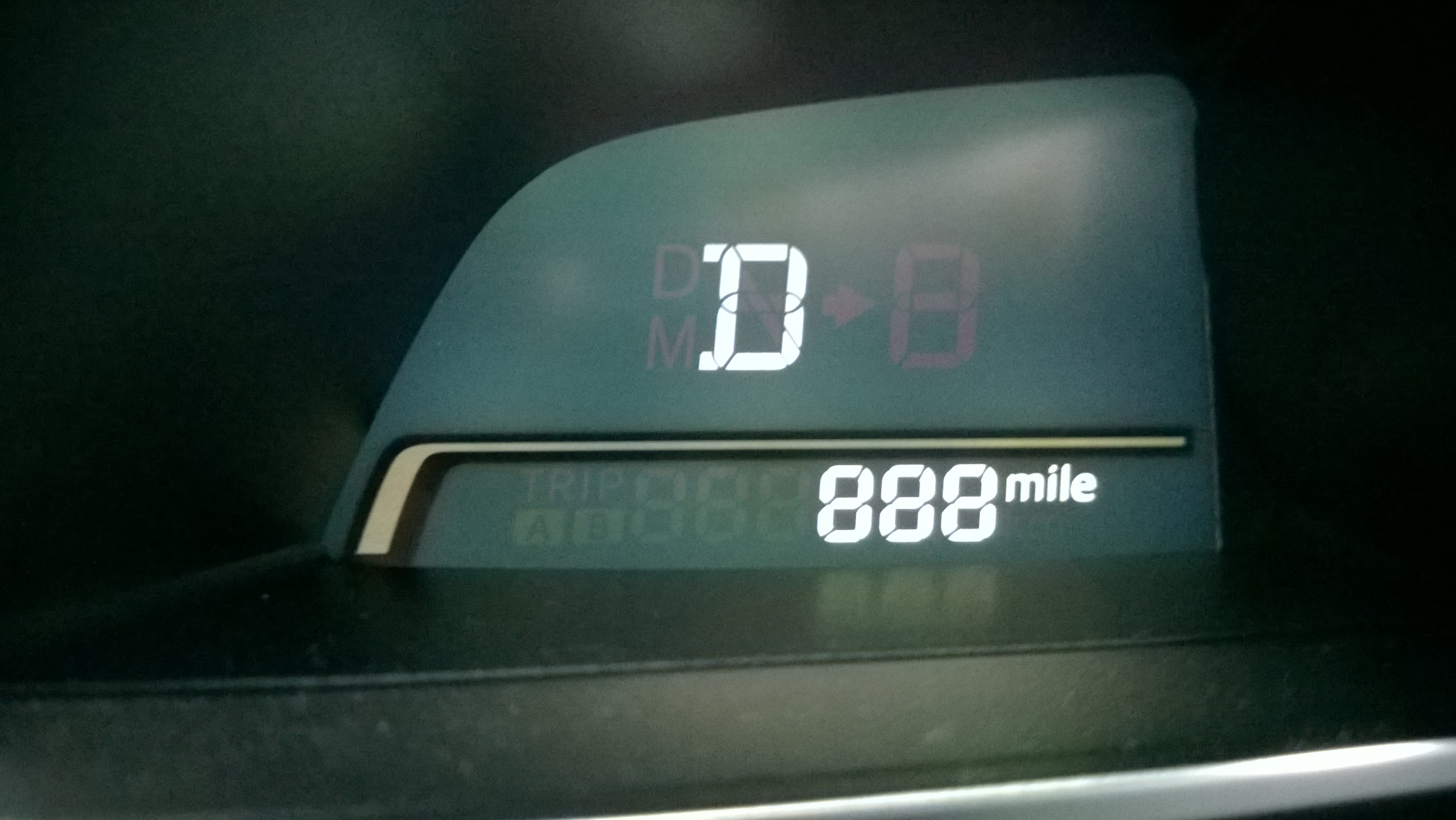 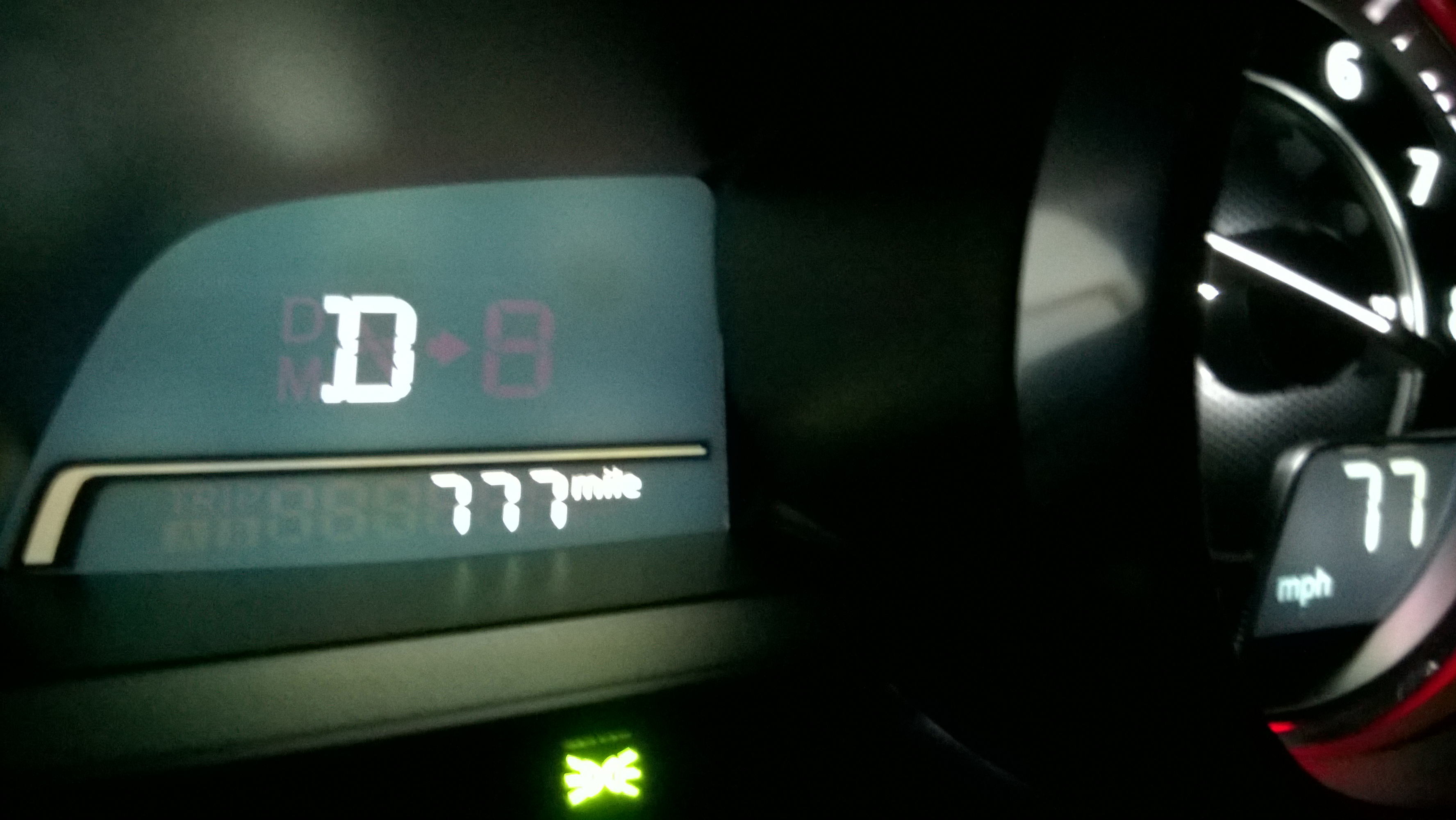 Nothing to see here!

The good folks at Mazda3forums.co.uk assure me that the leak is almost certainly just condensation from the air conditioning unit; nothing to worry about. 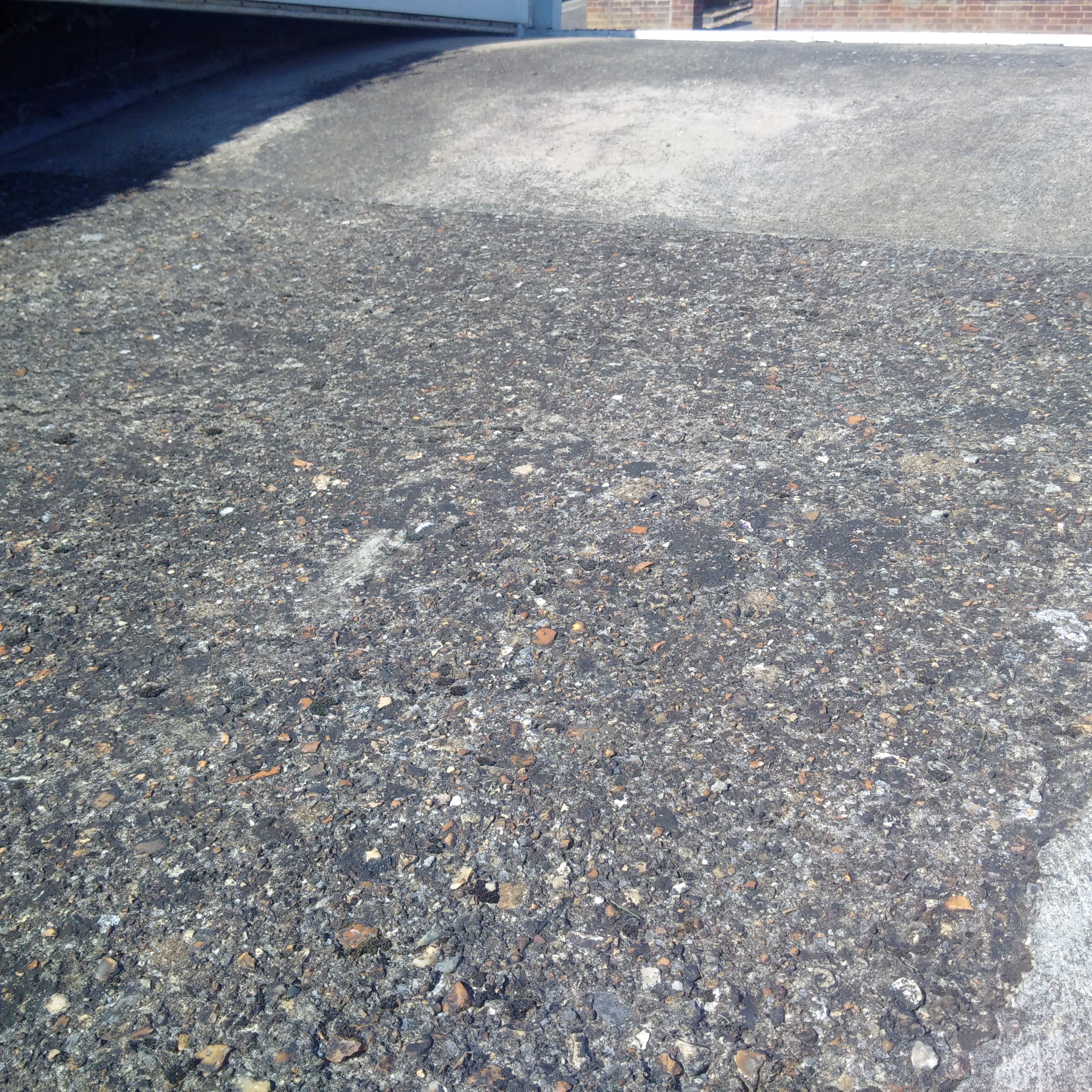 As the suspected, today the leak from last night had totally dried up without a trace, so it’s not oil or fuel etc. Could still be the washer liquid, but I’ll keep an eye on it and see if it’s just the aircon as suspected.